Home » Art in the Dark 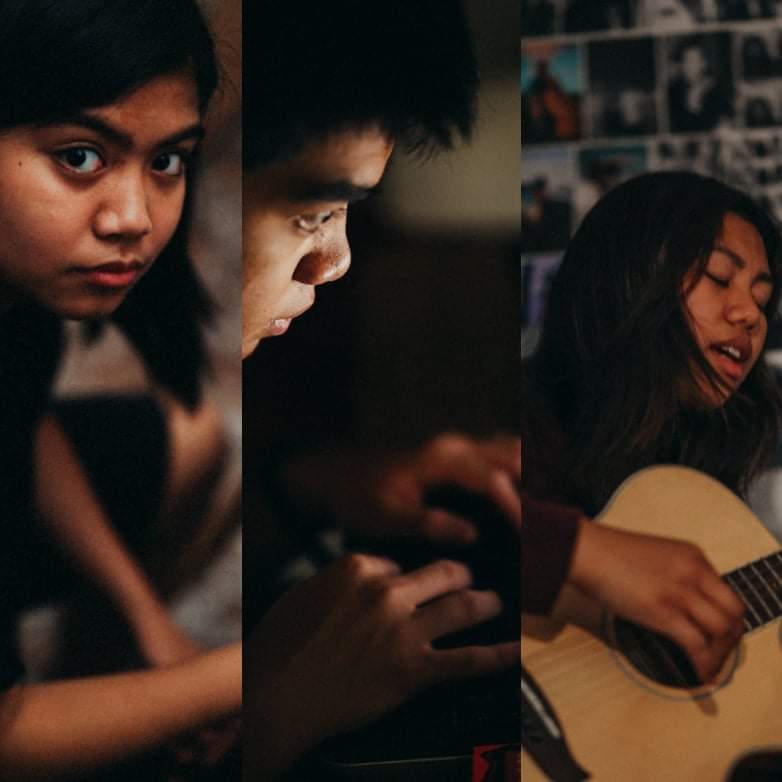 Teenagers have a different way of coping with the COVID-19 pandemic from adults.  In Barcelona, three Pinoy teens shared how they dealt with the emotional impact of the lockdown.

On 13 March 2020, Spain declared the State of Alarm during the COVID-19 pandemic. Nine million students all over the country were ordered to stay home for 15 days. Isolated from the outside world, they were left with no choice but to look for ways to cope. Many people turned to the arts to keep them sane.

Amber  Ocampo, 16, binged on Netflix during the first days of the lock down. She could not see her boyfriend, neither sing in the choir nor play volleyball with her friends. She was left in the solitude of her bedroom. Being used to having an active life, her morale began to crumble. She started to worry about random things.

As the lockdown dragged on, Amber slowly began to lose herself. She ate, watched Netflix, slept and quarrelled with her mother. She felt misunderstood.

One night, trying to drown her sorrows, she grabbed her guitar and started to pluck, strum and hum.

For Eduard Caringal, 13,  the lockdown meant more time for anime shows. He would wake up late, watch series, chat with his friends and sleep late at dawn. Eduard accepted the fact that he couldn’t go out to see his friends nor go to his choir practices. The only thing that  pulled his spirits down  was when a favourite  anime show came to an end. One time, Eduard had an idea. He switched on his laptop and started to type.

Katrina Oamil, 14, and her classmates became emotional when the lockdown was officially announced. Although she was worried that her father could get  infected anytime because he was still working, Katrina was not frustrated. Her mother busied  herself cooking  and would ask her to help around. The house always smelled of food. There was no space to be sad. Katrina  took advantage of the lockdown to do the thing she really loves doing. She picked up her coloring materials and  drew.

Art as a shield and defense

According to Eva Marxen, an art therapist and anthropologist, art is a good way to channel one´s thoughts without having to verbalize them.

People of all ages posted videos of songs, artworks online for the world to see as art has become an outlet to survive the grim reality of the pandemic.

She was the girl who was  wearing a smile.

She was the girl with a happy ever after.

But what do you know?

So goes the first stanza of Amber´s “Brown eyes”, her first song.The moment she picked up her guitar that night, the melody and the lyrics just blended  harmoniously. The song is about a girl who used to be happy until the people around her broke her heart. Something that reflected her state of mind that time. Amber found comfort in the lyrics of the song.  “Little by little, I realized that composing songs makes me happy. Singing with all my soul makes me happier.”

Eduard wrote “Mi vecino esta coronado” (My neighbour got Corona-ed”), a witty  novel about 11-year-old Stuart and his Chinese neighbours Mr and Mrs. Weng. When the lockdown is announced, Mr Weng gets ill and Stuart suspects that it is COVID-19.  The 10-chapter novel takes a funny twist when Mrs. Weng asks Stuart to look after  the sick Mr. Weng. Stuart´s ignorance of the virus fuelled by the fake news he picks up from social media make things complicated. “I chose this story  because I see myself in Stuart.” Both Stuart and Eduard have no siblings. The only difference is that in real life, Eduard doesn’t have Chinese neighbours.

For her first artwork during the lockdown, Katrina drew a girl with a scarf wrapped around her face covering her mouth and nose. Behind her are two round objects with small spikes that resemble the corona virus. The girl´s eyes show no expression. Not even a  trace of fear.

Creating something toward self-discovery

But all of a sudden, you came into my life.

The sun showed up in my room.

All I see is you sitting next to me.

Amber´s second song “Hope” is about positivity. Her lyrics showed that she was slowly healing.

“What I learned  from the pandemic is that we can not always  laugh. We also cry. We are not perfect. We  make mistakes. But we also have to be strong. We can be happy by doing the things we really love and most of all, we can be happier by seeing our parents happy. They are one of my main reasons why I should stay happy, or at least try to be.”

Katrina now knows how it feels when a student cannot go to class due to an illness. Grateful for being healthy, she focused her energy on her artworks. She came across various children´s art competitions around the world. She decided to send an entry to Texas and one to Tokyo. Her Texas entry would eventually win her an honourable mention.

American dancer Twyla Tharp once said, “Art is the only way to run away without leaving home.” Amber with her original songs, Eduard  with his personal novel and Katrina with her artworks, survived the crisis  by creating something beautiful when all was dark and baleful.

This article was first published in the Summer 2021 Issue of the Filipino Expat magazine.