Home » I wish I was furloughed

The Covid-19 pandemic cost millions of people their jobs. But there are some, like our columnist MZ Akil, who wish they were furloughed, or temporarily relieved of work responsibilities while getting paid. In her first article, she tells us why, and shares with us her lockdown thoughts.

At the height of several lockdowns in the UK in 2020 and 2021, while my furloughed friends were at their wits’ end figuring out how to fill their days, I was imagining how I could have used the time to write that short story I started in fiction-writing class, or perhaps the beginning of a novella. It could have been my nine months of conception when I could have birthed a literary project. I was instead cooped up behind my desk at home working full-time hours writing emails rather than stories.

During his self-imposed exile from Napoleon III, Victor Hugo ran off to Guernsey where he closed the chapters of ‘Les Misérables’. Sir Isaac Newton, fleeing the Great Plague of London for his family’s estate, had most likely not much to do but observe apples falling from trees thereby cementing his theories on gravity and motion. In the 1300s, Dante Alighieri was banned from Florence and spent his time wandering Italy. From 20 years of reflection in exile, ‘The Divine Comedy’ was born. Harper Lee’s friends paid her salary for a year so she could focus and write whatever she wanted. ‘To Kill a Mockingbird’ remains a bestseller and earned the Pulitzer Prize for Fiction in 1961.

Not that I could possibly equate the genius of these literary and scientific figures, nor do I have friends who’ll pay for me to write my masterpiece, the common factor in achieving their legacy was having time in their hands.

I took it as respite from the demands of everyday life. Rather than trains to catch, timetables to strictly follow, appointments to cross out in my agenda, and crowds to negotiate, I was suddenly setting my alarm later for much-coveted duvet days, purchasing and queueing books to read, catching up on Netflix which I did not even have a subscription for pre-pandemic, and dreaming of words to write when not mentally drained after a day’s work. My body and soul couldn’t be any happier to be at home despite the unfortunate circumstances that have hauled us indoors.

I put down the book that I was reading on the chair I acquired for the reading corner I set up during one of the lockdowns, and look around. The mini home redecoration has materialized. The plants have survived. The dishwasher has been unloaded, laundry basket empty. My home desk has been temporarily transformed into a work station which I walk away from on the dot to virtually attend yoga and Zumba. The peace and stillness are a contrast to my achy body, not from exhaustion, but because I have residual energy to look after my physical well-being. In some countries in the EU region work-life balance is not an alien concept, whereas in the UK working long hours is the norm. That’s the only cancel culture I would advocate.

We were called back to work on the 15th of June 2020. For nearly a year now, I’ve been relishing my train rides to and from London when there are days I have the carriage all to myself. As an ambivert with more introverted tendencies, social distancing is a blessing. Wearing a mask is a rule I hope we can drop very soon, but it has been a convenient cover-up at times when dozing off on the train would leave my mouth embarrassingly gaping.

I have been intermittently working from home since November 2020, and whereas staff who work remotely are deemed unproductive by other organizations, our management views it as essential for my department to keep on top of our work load. I wish this arrangement
will be retained for the sake of my sanity.

To date, 79.4% of UK adults have now been vaccinated with a first dose, and 57.3% are fully vaccinated. The COVID-19 vaccination drive is hailed a success on which the UK government has placed their confidence towards the lifting of restrictions on June the 21st, dubbed “Freedom Day” by the British media. Delta, the Indian variant was a developing threat to ‘Freedom Day’ but Boris Johnson initially insisted he didn’t see any valid reason why June 21st should be postponed for another month. But the variant has indeed scuppered the planned date which has now been pushed back to July 19. Meanwhile the impetuous holidaymakers have been slapped with new restrictions, extra expenses for PCR test, and quarantine. New red-list holiday spots have also been added. The conspiracy theorists and anti- vaxxers must be cruising on their ocean liner of I-told-you-so.

Amidst these, I just want to set foot in an airport again, not to go on holidays, but to see my family. The sun, sea, and the sand are fringe benefits. And perhaps some time to focus on writing. But I guess these are too much to ask for around this time. 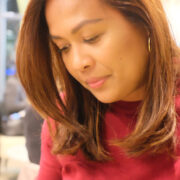 MZ Akil worked in publishing and briefly in television in the Philippines before moving to the UK in 2006. She spends her train journey to and from London—where she has a remit within luxury fashion— randomly musing about life and occasionally talking about it in her blog. Her lifelong aspiration is to write stories rather than emails.

A failed job hunting in Barcelona