As a Filipino living in Monaco, Francine Vito discovers the green side of this tiny nation often called the billionare’s playground.

On a sunny Saturday afternoon in February, I was attending my first local event in Monaco. It wasn’t a fancy ball or a yacht party. Decked in an apron instead of a long gown, I was joining a Zoom workshop on Zero-Waste and Healthy Cooking from the comforts of our kitchen. This free class was organized by La Transition Énergétique de Monaco and Ecoslowasting, a business that saves unsellable yet perfectly edible food from restaurants and grocery stores.

I tried my best not to cut my fingers off while keeping my ears sharply focused on the host’s French instructions, my eyes constantly checking the two casseroles filled with ingredients boiling on the stove. I could not keep up with other participants and I started to doubt this idea of taking a cooking class in a language I wasn’t fluent in. But an hour and a half later, I was able to cook two beautiful rolls of gluten-free cannellonis made from leek tops and a recipe for a lacto-fermented drink from beets and old dark bread. Not bad for a first local group event.

Sustainability, saving food waste, and luxury might not always go together, especially when you think of Monaco. The world’s second smallest country is commonly associated with glamour, gambling, and fast cars, thanks to its famous Casino de Monte Carlo and the Formula 1 Grand Prix race.

Over the last few years, I have started practicing a more sustainable way of living. I thought that moving to a place synonymous with extravagance would be difficult. I expected that moving here would be the death of my bank account. Will a probinsyana like me survive?

Most of us have a surface idea about Monaco, formed by what’s in the media and movies. I had no clue about its greener side. Dubbed by Architectural Digest as an unexpected leader in sustainability, the microstate has impressive environmental goals: to reduce its greenhouse gas emissions to half by 2030 and become carbon neutral by 2050. The current monarch Prince Albert II has even been nicknamed Green Prince by the press for his environmental work.

What it lacks in territorial size, it more than makes up with its natural beauty. Monaco is part of the Western Alps and nestled in a 5.47 km stretch of land in the Mediterranean coast. It shares its borders with the South of France and Northwest of Italy. Its geography means it has treats for everybody- clear turquoise waters of the Mediterranean Sea and a majestic landscape of rocky cliffs. Exotic plants imported from abroad co-exist with their local cousins, palm trees, fire lilies, and a myriad of cacti and succulents.

Monaco in real life is as picturesque as what you see in movies like James Bond or To Catch a Thief.

Don’t get me wrong, the bling is still strong. Expensive cars are the norm, not a rarity. I’ve often found myself in one of the city’s elevators next to a coiffed Madame who looks like a walking jewelry display. Women wear their Chanels and Diors to walk their dogs. The air always smells slightly perfumed, and I’d venture to say it’s because of the amount of perfume people use.

A google search for “life in Monaco” will show results for articles and videos that only seem to cater to millionaires. Not really a surprise, as average property prices can go as high as €48,000 per square meter! Its status as a tax haven makes it a big draw for high net-worth individuals. And it doesn’t hurt that Monaco has more than 300 days of sunshine a year, mild winters, and a highly secure environment with constant police presence and camera surveillance in public spaces. The healthcare system is great and some of the world’s best doctors can be found here. And a huge parking space dedicated to yachts.

A return to nature

I moved to Monaco to be with my boyfriend this year but landed in the middle of a Covid-19 pandemic lockdown. The streets were quiet. There was barely anybody outside, except for the occasional walker or runner. Restaurants only did take out, but a good number of them didn’t even bother to operate. Theaters, museums, and non-essential shops were closed. Public events and gatherings were not allowed. All the places and activities that help expats immerse in local culture, shuttered for the time being.

Monaco may be a bustling city with construction work going on almost all the time, but it has solid policies on having green spaces. Its total land area is only two square kilometers, but 20% of the territory is occupied by parks and gardens.

The pandemic has stripped most cities of their extraneous frills. As everything was limited to the essentials, it’s fascinating to get a glimpse of a place without the incessant activities that mask its beauty.

For urban residents, this is crucial. Numerous studies back up the benefits of green spaces in cities, where the pace of life is often fast and stressful. These are places where we can rest, exercise, meditate, or have picnics with family and friends. It also makes the air cleaner, temperature cooler, and noise insulated.

As a self-confessed plantita, one of the things I love doing in Monaco is visiting the gardens and parks. There are several of them spread around the city state, and each of them has something unique to offer. Jardin Exotique is home to a large variety of cacti and succulents (movie buffs take note- this garden is featured in the Netflix remake of Rebecca). If you’re in the mood for some zen, there’s the Japanese Garden, and with its small waterfall, brook, tea house, and oriental bridges, you’ll be transported into Asia for a little while. The Casino Gardens houses exotic Birds of Paradise and colorful tropical flowers. Not far from it is the Little Africa Gardens, home to some of the Heritage Trees of Monaco. Just outside our apartment is Parc Princesse Antoinette, a park slash playground with a mini farm and a vegetable garden intended to teach kids about growing food.

Among all these, my favorite has to be the St. Martin Garden located in Monaco-ville, Monaco’s oldest district and home to the Prince’s Palace. The park sits atop Le Rocher (The Rock,  62 meters above sea level, offering spectacular views of the sea and the ancient Port Hercule. It’s a tranquil, green oasis full of surprises. Walk through the park and you’ll find bronze works of art, small ponds, ancient trees, or that perfect quiet spot to rest or read a book.

No Porsche? No Problem

Travelling in and around Monaco is a breeze. They have eco-friendly local transport: a bus system which runs on electricity and biofuel and an electric bike-sharing system called Monabike.

My main mode of transportation, however, has been my two trusty feet. Talk about burning calories while saving euros. Walks are a great way to get to know a place better. You get to see things and events happening up close that you won’t even notice when you’re in a moving vehicle.

Walking in Monaco isn’t like a leisurely walk in Central Park, as Monaco is built into the cliffside of hills. Going inland from the downtown areas means having to walk up an incline. One needs determination, good cardiac health, and a whole lot of leg muscle power.

For people who want to challenge and meet their fitness goals, stairways are all around the city, discreetly tucked in between buildings. They provide moments of respite if you find yourself out of breath and weak-kneed from walking. From some of these passages, you can see beautiful views of the Mediterranean Sea framed by colorful Belle Epoch buildings. Of course, taking hundreds of stairs every day is not everyone’s cup of tea. Thankfully, there’s a whole network of elevators and underground passages throughout the principality.

Sustainability in their DNA

Monaco’s green movement is not a recent reaction to the threat of climate change. It had been a part of their DNA since 1889, during the reign of Prince Albert 1. The Monegasque prince was a pioneer of environmental awareness, an explorer, and lover of science. He established the Monaco Oceanographic Institute, including the Oceanographic Museum, one of Monaco’s architectural marvels perched on the edge of a cliff, looking over the sea. The institute supports the study and protection of the oceans and holds regular activities tackling the effects of climate change.

Prince Albert 1’s vision is carried on by his successors and supported by both public and private sectors. In fact, the private sector is a key player in sustainability efforts in Monaco. Businesses adheres to government campaigns like “Monaco Takes Action against Food Waste”, which encourage restaurants to reduce food waste, and “Mediterranean Sustainable Buildings of Monaco” which promotes eco-friendly construction.

I spoke to a local who works in one of Monaco’s environmental organizations and his advice is: Start with educating more people. Organize fun and engaging events to educate the public in their schools, parks and in their households. Monaco holds events like Ocean Week, National Awareness Day for Bees, and even a walking tour called Heritage Trees Trail to showcase Monaco’s “green heritage” and their efforts against deforestation. When the public has interest and knowledge about something, from kids to adults, it’s easier to inspire action and change.

I realized that places usually have two faces. A superficial one, the image promoted by tourism industry and clever marketers and the one hidden to most people, the face that you only see after you have stayed long enough to let the smoke and mirror tricks fade.

Living in Monaco redefined luxury for me. It is like living in an open-air museum filled with plants, art installations, and old buildings, free for everyone to enjoy. Monaco taught me so many lessons on living a more sustainable life and inspired me to care for the environment even more.

This article was first published in TFEM Autumn/Winter Issue 2021. 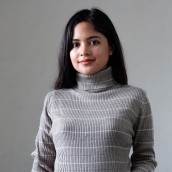 Francine Alessandra Vito is a writer, serial thrifter, and an advocate for the slow living lifestyle. You can find her sustainable fashion and lifestyle posts on her Insagram account, @francinealessandra17.

Philippines: Far from the madding crowd

10 Filipino products to get you through Fall and Winter

Reagrupación familiar: A Filipino family’s journey to reunification in Spain

Pirate siege: A seaman’s nightmare on the high seas