Food blogger and social media influencer Rhafael Antonio grew up without an oven, and had to learn the basic of cooking by using gatong (firewood) from his Lola Juana. But the lessons he learned from his favourite grandmother led him to become food ambassador for Filipino cuisine.

Unlike the other kids in our neighbourhood, I knew I was different. I was not adventurous and was more of a homebody. I think it was because at a young age, my parents gave me enough tasks to do. The kitchen became my playground.

Growing up, I spent a lot of time with my late Lola Juana, from whom I learned to cook. I would help her prepare food for the family. I became her official sous chef because I believe, I was her favorite grandson. Lola Juana and I had a lot of fun cooking together and making food for everyone.

Lola Juana made the best dishes. Adobo, caldereta, kare kare, menudo and sinigang were my favorites. Like the women of her generation, living in the province, she did not own fancy cooking utensils like we’re used to nowadays. All she had were kawali (pan), kaldero (pot), sandok (cooking spoon) and syense (spatula). She taught me the basic skills of cooking, from cutting vegetables in different ways to telling whether a fish is fresh or not.

Despite having a gas stove in our small indoor kitchen, Lola Juana preferred cooking in the dirty kitchen, using gatong (firewood) instead. At 10 years old, my very first task was to start the fire, with smoke hurting my eyes and ashes blowing in my face. Lola would encourage me to go on fanning the embers until I finally managed. “Kaya mo yan,” she would always tell me.

Food has become my passion; I joined a couple of classes at the Center for Culinary Arts in Manila to acquire more knowledge and hone my skills. I made my first ever paella and won the best dish in the class. I was beaming with pride.

In 2012, I moved to Canada and lived with my relatives in Calgary, Alberta. There, I had to learn how to use cooking equipment that I’d never used before. It might sound unbelievable, but I had never used an oven or baked anything until that time. The food processor, juicer, and even the oven became instant novelties to my liking. Working with my new kitchen companions, the first thing I tried to bake was a pineapple upside-down cake, which wasn’t a disaster, but wasn’t pretty either.

From Canada, I decided to move to the Netherlands in 2016. I was eager to take my culinary knowledge to another level, so I connected with fellow foodies in Amsterdam. I was invited to join a course at one of the top culinary schools in the world, Le Cordon Bleu in Paris, France.

After a few years of practice and trial and error, I have become more comfortable using my modern kitchen tools and equipment. I appreciate how they can save time, allowing me to create delicious bites using my favourite Filipino flavours and add twists to the traditional dishes that I grew up with.

Last year, at the height of the pandemic, I bought my sister an oven as a birthday present.  She was intimidated at first. I remember having the same reaction when I had to use the oven for the first time. After a few tries, she learned to make the best yema cake. The oven also became a source of income, as she now regularly bakes pastries and sell them in the market to augment her income. I was extremely happy to see how food had also helped her.

Cooking for me has become a process of recollecting the memories of my childhood and honouring my Lola Juana and the lessons she taught me, not only the outcome but more importantly, enjoying the process of cooking.

From a little boy who learned to cook using firewood to becoming someone who can influence, in his own little way, how the Western world sees and appreciates Filipino cuisine, this is a huge responsibility, but I am ready!

Lola Juana once told me, “Raf, it doesn’t matter what you have or how you do things. What matters most is that you love what you are doing and that you are doing it for the people you care about.”  This lesson stayed with me, and I live by it until now. She was my greatest inspiration. 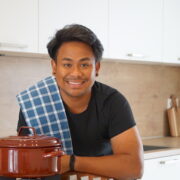 Rhafael Antonio is a social media influencer behind @tastecrib, an Instagram food blog and the brand name of baking kits. He is also a recipe creator, a corporate guy and all-around cooking enthusiast. He lives in the Netherlands with his husband. 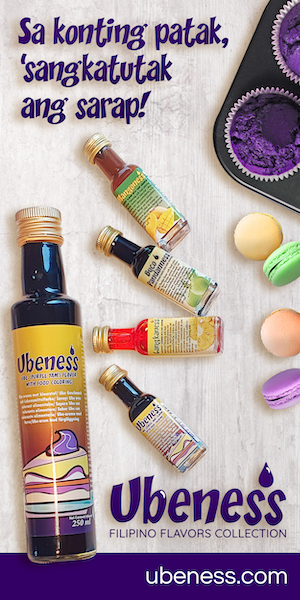