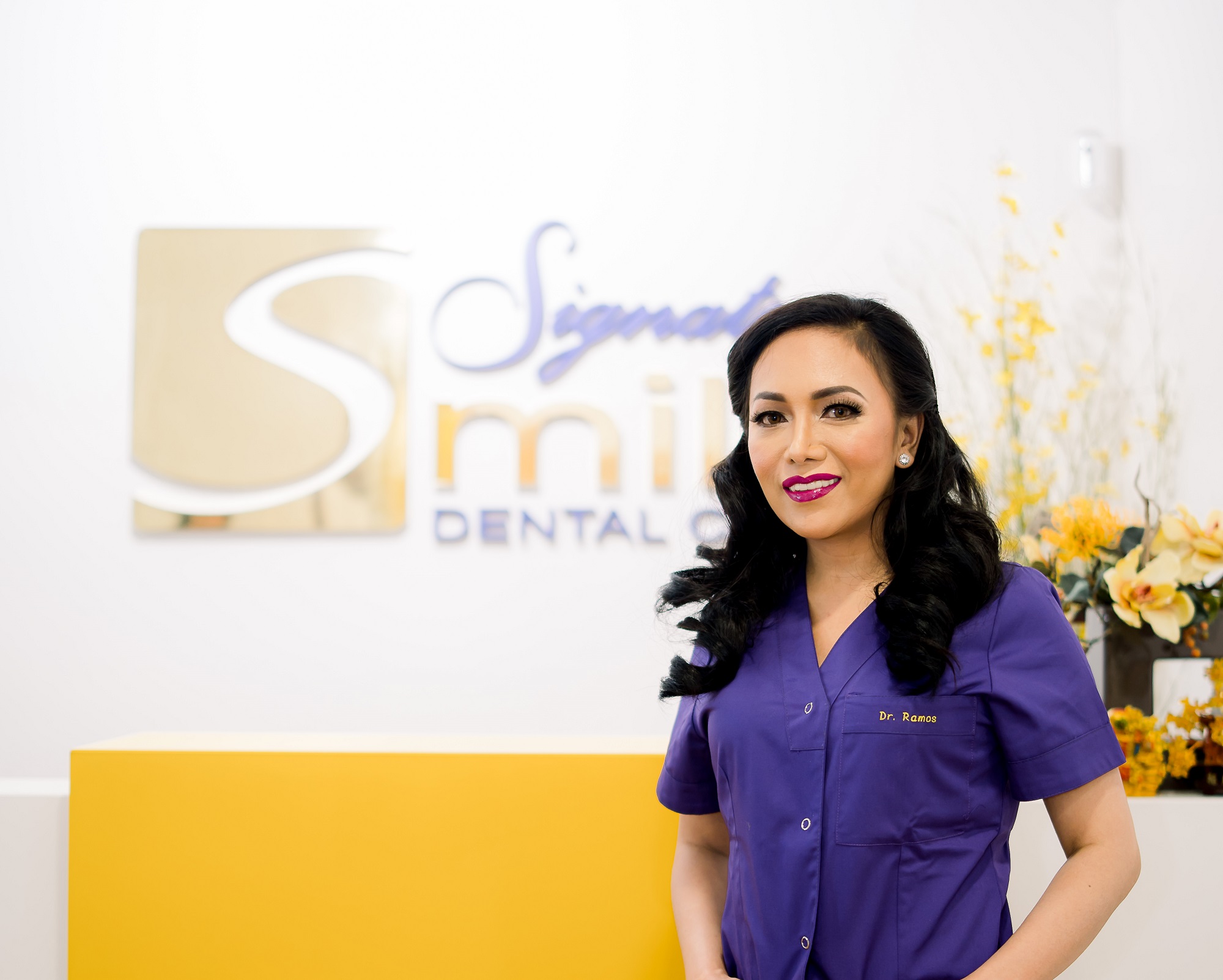 Eve Ramos left her successful dental practice, and the love of her life to be with her mother in Spain . Pregnant and soon to be a single mom, she weathered all odds to become the first licensed Filipino dentist in Barcelona.

“There’s no extraction for the little girl today,” Dr. Eve Ramos tells the mother of her eight-year-old patient. “If we pull the primary tooth this early, there might be malocclusion, or successive tooth and space loss. I’ll prescribe a painkiller for now,” she gently explains, then assures her nervous patient that she will take care of the aching tooth when it’s ready.

Doc Eve can relate to her young patient. When she was eight years old, a dentist had carelessly pulled her protruding baby tooth (or sungki) instead of waiting for the proper eruption, which resulted in space loss. Because of this incident, she decided to become a dentist.

Born to a middle-class family in Sta. Teresita Cagayan, Doc Eve, as she is fondly called in the Filipino community, already had an inclination that one day she would end up living in Spain. After all, her mother and her older brother where already working in Barcelona by the time she attended university. What kept her from leaving the country was her steadfast dream to become a dentist.

She took a double degree at Centro Escolar University in Manila and finished Dental Technology in 1995 and Doctor of Dental Medicine in 2001.  Right after graduation she set up her own dental practice in Quezon City. She further specialized in temporomandibular joint (TMJ) disorders and Orthodontics.

Studying and performing well at school was her way of coping with the absence of her mother while she was growing up.

It was this longing for maternal love that eventually led her to the decision of migrating to Spain and realizing another great dream, to practice in Barcelona.

“My mom convinced me to try (living in) Spain even though things were going great for me in the Philippines. It is a common perception that life abroad is a lot better. That the grass is always greener. My mother would remind me that there was no Filipino dentist in Barcelona. She would always suggest that I visit her just to see the possibilities of working in Spain. Later, I realized that this was her way of saying, come here and be with your mother.”

After hesitating to leave everything she had built behind, she eventually conceded. But fate played a mean joke on her.

Single mother in a foreign land

When her papers were approved, Doc Eve was eight months pregnant. Leaving the Philippines did not only mean giving up her business, but also leaving her then boyfriend. And while she was fine with her decision, another problem loomed large. She was not allowed to fly anymore.

“I asked my obstetrician to certify that I was capable of travelling. I tried to convince the Spanish embassy to give me my visa and KLM airlines to allow me to fly. And I prayed, and never stopped praying. I held on to my dream of becoming the first Filipino dentist in Barcelona,” she narrates, her voice echoing her determination.

In 2004, on her last month of pregnancy, Doc Eve arrived in Barcelona. Barely two weeks after, she gave birth to a bouncing baby boy she would name Lance. When her son was six months, she decided to work.

Doc Eve had to start as a dental aide at the ARVOO Suise dental clinic.  At the same time, she worked in different dental clinics to improve her skills, while an elderly Fillipina took care of her son. As she finds her way in the Spanish dental practice, and improve her Catalan language skills, she began to come out of her comfort zone and welcomed everything that came her way.

At the ARVOO Suise, her employer was impressed not only by her knowledge but also by her work ethics. Not long after, she was allowed to install brackets and handle simple dental procedure. To improve further, she took up courses in Spanish dentistry.

Despite her skills, she was still considered a dental assistant. Her education, specializations, and her license as a practicing dentist in the Philippines were not recognized in her new country. She felt that she is not living up to her full potential. So, she decided to make another drastic change in her life.

In 2008, Doc Eve decided to be a full-pledge licensed dentist in Spain. This decision turned out to be a baptism of fire. This time, her family discouraged her from going after her dreams.

“I understood where my mother was coming from and why she was against my plans. It was typical of Filipino parents that when their kids are already here in Spain, they push them to look for a job right away without considering the possibility that they can work in jobs that fits their education and accreditation. My friends and family members were wondering why I was risking everything. They even doubted my chances of passing. They laughed at my decision. She wouldn’t pass anyway so why bother, they said,” she said, the pain still lingering in her words.

The process to be recognized a licensed dentist in Spain is long and tedious. In addition to validating her diploma and transcript of records with the Spanish Ministry of Education, she needed to take several exams.

Juggling different roles became too much for her. So, she quit her job, a decision that did not sit well with her mother.

“There was constant nagging. I could not help but compare the times when I was still in college. On exam weeks, my father would prepare my favourite food and let me review in peace.  But with my mom, it was the opposite.  We argued and fought a lot. I couldn’t focus on my studies, so I decided to move out and rent a small room for me and my son.”

Doc Eve was living on government support, a measly €420 a month. She was struggling financially. So, she would pick up her son during lunch time, so they can use the €3,50 beca (meal allotment) to augment his tuition fee. There was no money for school trips or swimming lessons. At one point, there was not even money for tuition fee. She had to beg the school director to let her son go on studying.

Amidst all these, she suffered in silence. She hid her struggles from everyone, except her younger brother. Her father and friends in the Philippines thought she was living the life in Europe. She was on the verge of giving up, but she knew she was not born a quitter. She would never abandon her dream.

After more than a year of reviewing, taking extra courses and doing several exams, Doc Eve finally got her license in June 2010. She did not waste time setting up her clinic, even though she had to surrender a part of her income to DKV insurance for renting a space in their building.

In the span of seven years, Doc Eve transferred to two locations to cater to her ever-growing clientele, both Filipinos and Catalunyans. In 2017 Signature Smile Dental Clinic finally settled in their new home in Porta d’Angel. She now has three other dentists and four assistants working with her at her clinic.

Signature Smile is also popular among expats and tourists in Barcelona. Japanese expat Kazuyo Fukuda, who is based in Madrid, would travel to Barcelona every month to have dental work done specially by Doc Eve.

“I had a very severe dental problem and all the dentists in Madrid advised me to do a surgery. But I found Doc Eve online and she fixed the problem with only brackets. I felt the efficiency of her work, she listens to my preferences and I’m only too happy to travel to Barcelona for check-ups,” says Fukuda.

Not all her patients are pleasant, but this tough dentist know how to handle them.

“There are impolite and rude patients, but I also manage the situation well. I believe in humility.  At first, they will look for your weaknesses or any mistakes. For me, if they give me a chance to fix their teeth, I will be happy.”

Since getting her license, many aspects in her life began to improve, including her relationship with her mother.

“I realized that with Filipino mothers, if their children come here to live with them, they will treat them as if they were still young children, not as adults.”

Doc Eve never forgot who helped her during her struggling years, especially the Filipino church in Barcelona. To give back, she started dental mission in Barcelona where she gives free cleaning to 150 patients every year, and free tooth extraction for children. She supported Ang Kabataan Organization (AKO) with their programs for Filipino youth in Barcelona. Her efforts were recognized by the community, and she became a finalist for the 2012 Jose Rizal Awards for Outstanding Filipino Entrepreneurs in Catalonia.

Her generosity does not stop in Spain. Doc Eve regularly donates to her former school, to marginalized sectors, indigenous communities and even fishermen in her hometown. She also collaborates with the Philippine Dental Association in their dental and medical missions in Navotas, Marikina and Laguna.

During the pandemic, she also sent financial help to augment hunger in her hometown. In Barcelona, she distributed food packs and face masks to her patients.

Thanks to her burning passion to help people smile, Doc Eve turned her dreams into reality. After 16 years of living in Spain, and a decade of running her own dental clinic, she is finally settled. Her son Lance, now 16 years old, could go to any school he chooses or buy any shoes he wants. Her relationship with her mother is better than ever, who now also believes that it is her daughter’s destiny to become a dentist.

Doc Eve has found his place in Spain, and peace in her herself. She has nothing more to prove.

“Being a “petitioned” child of a migrant worker in Europe doesn’t have to mean abandoning your own dreams or settling for just any job without personal growth. Like my son’s hungry shoes, I filled my hunger for knowledge and recognition with sacrifices and dedication and this would be my legacy.”

This article first appeared on Expat Herald in December 2020.