Home » A cup of Turkish hospitality

A Filipina expat teacher learns how to drink Turkish tea and discovered how the country’s culture and hospitality is anchored on it.

I arrived in Turkey in the summer of 2008. It was almost 30 degrees but the weather was pleasant. My Canadian colleague picked me up from the airport and we drove straight to my apartment in Ankara, the Turkish capital, where I would be staying as a teacher in an international school.

I recalled my anxiety when I boarded the plane in Manila. I was nervous about my new home. I do not know much about Turkey. Rail me not if the closest thing I associated Turkey with back then was Ilmas Bektas, the former Turkish husband of Filipino actress Ruffa Gutierrez.

“Are the Turkish people nice?”

During the meal, my new friend Sare introduced me to Turkish tea, a crimson-coloured tea served in a dainty tulip-shaped glass called ince belli She would expertly pour from a silver double-teapot called çaydanlik, whenever my glass runs out. I immediately liked this new taste, a sharp yet sweet flavour leaving just a hint of tartness in the tastebuds. After telling Sare how much I love her Turkish tea, she offered to teach me how to make it the traditional way.

A symbol of hospitality

In Turkey, offering tea and drinking tea together is a gesture of friendship. In every home and workplace, a pot of tea will always be brewing, ready to be served. It is often accompanied by a biscuit called kurbiye. Shop owners will offer customers Turkish tea as a sign of friendship and hospitality. While Filipinos would come together over a salo-salo, Turkish families and friends would gather together at tea gardens to enjoy each other’s company and drink tea together. Some health experts even claim that Turkish tea offers some  health benefits citing that it keeps the body´s mineral balance.

Tea is big in Turkey but surprisingly, drinking tea only became popular among the Turks in the late 30’s, after the government began cultivating tea plantations in Rize province. Today tea is the most popular drink in Turkey, at an average consumption of four glasses per person a day per. The country has also become one of the biggest producers of tea in the world.

How to make Turkish tea

Since the first time Sare served me Turkish tea, I have continued drinking it, and long after I left Ankara. I am sharing you how to make Turkish tea the way Sare and my other Turkish friends taught me to:

2. When the water is boiling, take out the top pot and put 4 tablespoons of loose black tea leaves in it. Put the top pot back on the bottom pot. Never stir or shake.

3. Transfer 2 cups of boiled water from the bottom pot to the top pot. Let them boil at medium heat for 10 minutes. Bring the heat to a minimum and boil for another 10 minutes or less. To avoid bitterness, never boil on very high fire. It will dry the tea in the top pot. Excessive heat will make tea bitter.

4. Turn off the heat/fire and leave the double teapot on the stovetop for 5 minutes. You can tell it’s ready when you see the tea leaves settle down under the water in the top pot.

5. To serve Turkish tea, first, pour tea 1/3 of the tulip-shaped tea glass from the top pot then fill the rest of the tea glass with hot water from the bottom pot.

6. Adding 1 sugar cube is optional. I don’t add a sugar cube to my Turkish tea.

Turkish tea is served very hot. You must hold the tulip-shaped tea glass by the rim to save your fingertips from burning.  According to my Turkish friend, the tea glass is curvy in shape to keep the tea warm and stop it from cooling down fast. I would often accompany my Turkish tea with a Turkish bagel, simit.

Making and drinking Turkish tea had become a way of life for me. Not a day would pass that I won’t be drinking it. Drinking Turkish tea was an essential part of my fondest memories as Filipino expat life in Ankara It made me appreciate their culture and embrace their tradition. 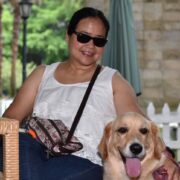 Wowie Oliveros Delos Reyes has taught in international schools in the Philippines, South Korea, Turkey, and China. She has been teaching overseas for more than a decade. She lives with her 4-year old golden retriever Isabella.