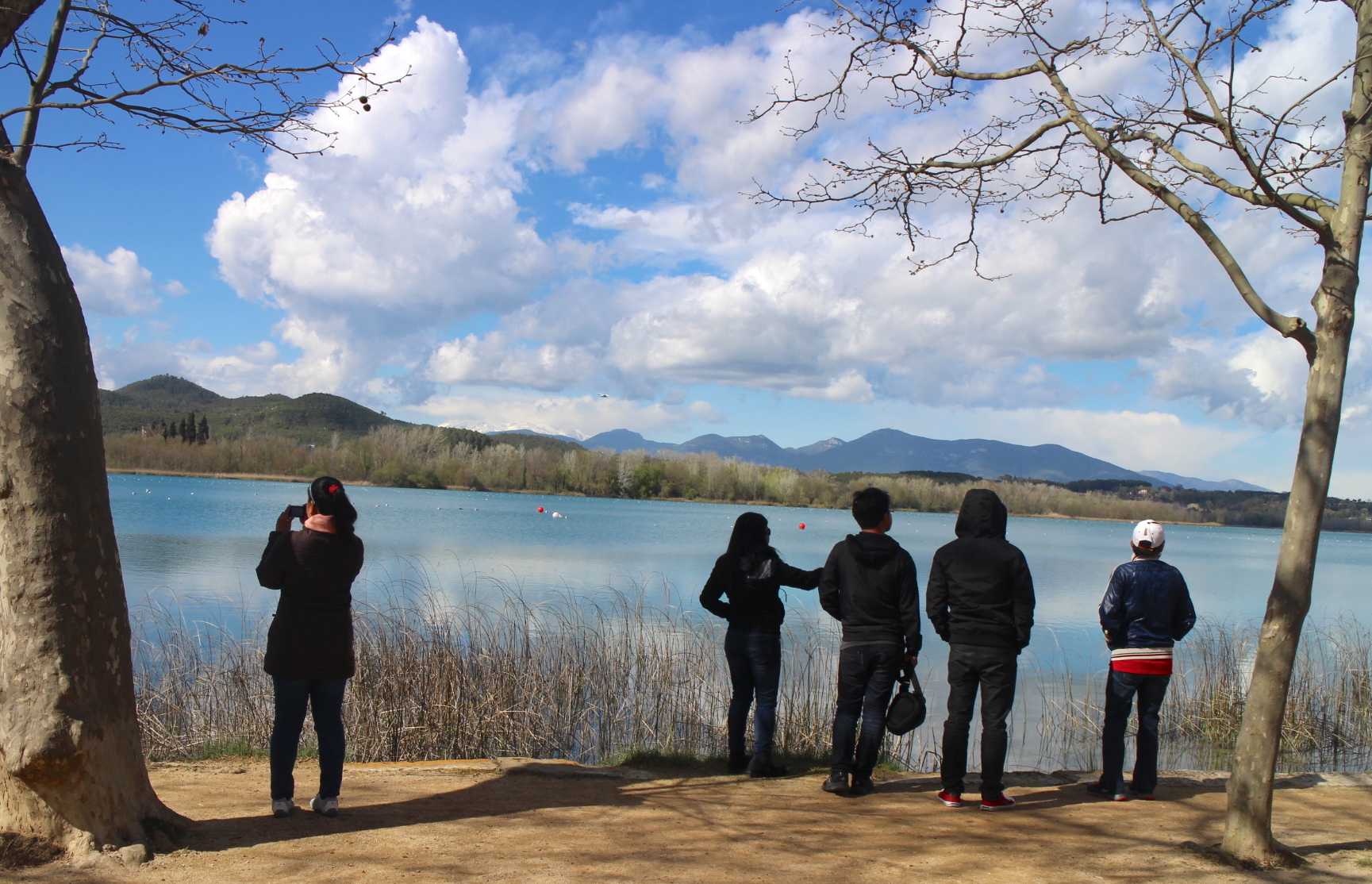 How can you tell a Filipino expat in a crowd? Our EIC Nats Sisma Villaluna writes a hilarious account of how Filipinos differ from our Asian friends , and how we are similar to Spaniards. Handy tips for our foreign friends.

“You seem to know a lot of people!” My Spanish friend, Manuel, blurts out.

I am walking with him to the metro when he sees me greet an Asian woman. Inside the train, he again sees me nodding at another Oriental-looking man.

“But you smiled at them, I saw you greeting a lady a while ago.”

“Yeah, but I don’t personally know them. It’s just that they are Filipinos,” I say matter-of-factly.

“But they could be Chinese or Thais.”

“I just know. It’s what we call lukso ng dugo in Tagalog, gut feel or salta de sangre in Spanish if there’s such a phrase. We have this certain Pinoy vibe. The way we move, smile, touch our hair or laugh –we just know. Sort of Pinoy radar, you know.”

For the Spaniards, we all look the same. We fall under one category: Chinese! Just like how we categorize almost all Caucasian-looking individuals as Americans.

I give Manuel some pointers on how to distinguish a Pinoy from the crowd. Besides having darker skin than our other Asian brothers like the Chinese, Koreans and Japanese, our eyes are noticeably bigger. Physical features aside, we are basically friendlier. It’s one trait that we share with the Spaniards. We can easily make friends.

Pinoys can be shy at first when meeting new people but give it a couple of minutes and we just can’t stop talking. We always have a ready smile. Filipinos in Madrid greet each other on the streets, in the metro, anywhere.

We love sharing our life stories, too, even to a compatriot we just met. This is understandable since most of us work in houses and are quite lonely. After work, we grab the first opportunity to talk and thus, recover from the hours spent alone and in silence. We always need an outlet: Someone to listen to our stories, anecdotes or even the nonsensical events that happened during our shifts.

It usually starts with a smile or a nod and then the inevitable question, “Pinoy ka (Are you a Filipino)?” followed by the word “Kabayan” (compatriot) or “Paisano.” A simple nod back will confirm that this Asian-looking man or woman is indeed a Pinoy. The next question is, “Saan ka sa atin? (What province are you from?).” Then, it becomes a pattern – you talk about jobs, salaries and back to more jobs. The downside though is that some of us tend to go a bit overboard, getting too friendly by asking too many personal questions.

One time, I met a Pinoy in the metro and he was already telling me his life story. Don’t get me wrong but I enjoy talking to my kababayans. It’s always a breather to speak in my mother tongue after hours of conjugating in Spanish. But sometimes, I’m just too tired or not in the mood to talk. When this happens, I pretend to be absorbed in my book, not looking up until my next stop.

My friend Grace has another approach. She was inside the metro train going home, feeling so exhausted after teaching five consecutive classes with ten very playful kids. She was not in the mood to talk to anybody. She just wanted to have a silent journey home. From her peripheral vision, she could sense that a Pinoy-looking couple were staring at her and, looking very eager to strike a conversation. Knowing perfectly well that once she said “Hi,” it would be an endless gabfest throughout the whole long ride home. She avoided glancing at the couple. It didn’t take long for the wife to finally go towards her and greeted her with the standard, “Pinoy ka?” Not wanting to look impolite and snob, Grace gave them a questioning frown. The woman, not about to give up, repeated her question matched with her sweetest smile. “Pinoy ka?”

She heard herself convincingly recite Chinese-sounding phrases that even she couldn’t understand. But she carried on. Needless to say, the couple was taken by surprise and the wife backed off without taking her eyes off her. Seeing the couple’s reaction, Grace wanted to laugh, couldn’t hold it in. So when the train stopped, she hurriedly got off even if it was not yet her stop. She just had to release a loud and hearty laugh.

Walking away, she heard the husband telling his wife.

“Ikaw kasi, tanong ng tanong! (That’s your fault. You just had to ask her!),” The wife, still unconvinced, stood her ground. ”Ah basta, Pinay yun no! (I tell you, that girl is Filipina!).”

After that incident, Grace hoped never to bump into that same couple inside the metro ever again or worse, in any Pinoy tambayan in Madrid where on Thursdays and Sundays, these places are always full to the rafters.

A cup of Turkish hospitality

Another sign that kababayans are in the midst is when we hear them talking at the top of their lungs even if they are just a few meters away from each other –another trait that we share with the Spaniards. This normally happens when we are excited which I believe happens all the time. One perfect place to witness Pinoys in action is in a church somewhere in Plaza Castilla in Madrid.

Here is one scenario: The Tagalog mass has just ended. One by one, Pinoys come out. You might expect an orderly exit towards the church gate, right? Wrong. Because Pinoys don’t head directly to the church gate but instead stay at the courtyard for a while craning their necks to find friends or relatives for a post-mass chitchat… in high decibels. One time, another friend, Mimi was waiting for a friend outside the gate of the church when she heard a thirty-something Pinay mumbling to herself on her way out. Later, Mimi realized that the lady was actually talking to her, completely miffed and annoyed.

“Do you see them? They are a bunch of loud uneducated people! Why can’t they just walk quietly, go out of the church and to their houses as quietly as possible just like civilized individuals should?,” the lady was telling Mimi.

Mimi just stared at her. She didn’t know what to say. The lady rambled some more. “This is already the third church that has agreed to accommodate Filipino masses. The first two just couldn’t handle the noise. I bet this church will also throw us out because of how we behave. This is so shameful. Look at them! Just look at them!”

Mimi couldn’t help but get distracted by the throbbing vein in the lady’s temple as she recited her disgust. Still, Mimi kept quiet. The courtyard got noisier and noisier and by the looks of it, the attendees were not in any hurry to get out of the church premises just yet.

“I can’t believe this! We Filipinos just don’t know how to behave! This is not a marketplace! This is a church for heaven’s sake! Why do they really have to shout! This is unbelievable!”

Just then her attention was caught by a familiar face in the crowd. Her ranting was abruptly cut. She waved her hand and started shouting. Yes, yelling at the top of her lungs.

“Melody!!! Hey!!! Over here! KFC tayo!!! MELODDDYYYYYYY!!!” She ran back to the church courtyard leaving Mimi still lost for words.

As Manuel and I get out of the metro station, I see a Filipino-looking couple coming our way. I ready my smile. But instead of smiling at me, I see them smiling at Manuel who just greeted them with a sugary, “Hola!” coupled with a broad smile. I shoot him a knowing look.

“They are Peeh-nhoys, aren’t they?,” he beams with a proud Madrileño shrug.