Home » Noli Me Tangere from a Spaniard’s viewpoint

I had always dreamed of visiting the Philippines ever since I met a group of Filipinos while studying at Universidad Autónoma de Madrid. But I never found the right moment, until I got a wedding invitation from my friends who were getting married in Boracay. Whenever I travel, I usually grab a book to use as cultural reference for my destination. A friend suggested that I read a copy of Noli Me Tangere, Jose Rizal’s first novel. Until then, I only knew Jose Rizal as the father of Philippine Independence and for me, Noli Me Tangere was comparable to Don Quixote.

In Spain, we usually analyze the independence of the Philippines from the Spanish point of view. In that version of the story, we lost the last remaining of what was used to be an overwhelming empire. Losing all of Spain´s colonies became a national humiliation.  At school we were taught that we lost our empire due to our own mistakes and, from 1898 onward, we assumed that we were a second-rate nation in a long process of decadence.

But we have never been told about the version of the Filipinos. I am among the many Spaniards who do not know much about the colonial society under the Spanish empire. I did not learn anything about the Philippines.

A book against Spaniards

Rizal’s style is similar to European authors from the same period like Émile Zola or the Spanish writer Vicente Blasco Ibáñez  who, in fact, collaborated with the corrections of Noli Me Tangere. I admired Rizal’s intelligent sense of humor and was impressed by how he presented his contemporary ideas in very intense dialogues. I think Rizal should be among the list of Spain’s great genre writers of literary realism such as Galdós or Pardo Bazán. Riza’s multi-faceted biography is also very impressive, and I could feel the sadness of his last days.

I would imagine that for Spanish readers, the most difficult part of the novel would be Rizal exposing how Spain treated the Philippines and demanded change from the conquistadores. In fact, many of my friends were shocked to learn that I was reading a book “against the Spaniards”.

After reading Noli Me Tangere, I found many situations that bear similarities between Filipinos and Spanish alike in the same period of colonization and even with the present.

Rizal provided a picture of a Spanish colony that was being mismanaged from the kingdom’s seat of power in Madrid, how Filipinos became second-rate citizens in their own country and how the friars abused their authority among the locals. He talked about the poverty that led Filipinos to commit crime, how harshly they were punished by the Guardia Civil, and how the Spanish authorities silenced their critics. But he also underlined the sad reality of Filipino division, the ones fighting for progress against the ones who wanted to maintain tradition.

In the 19th century, Spain was also going through the same problems. Politicians and the Catholic Church yield incredible power and there were criticisms about them as well. Spain also grappled with disputes between liberal and conservative parties, which stalled progress in the 19th and 20th century. Rizal and his contemporary Spanish liberals must have shared the same sentiments about the Spanish regime.

It was surprising how easy it was for me to draw parallelisms with the current situation in Spain. The recession that hit the world in 2007 had a lingering effect on Spain, which resulted in unemployment, worsening working conditions and people losing their homes. While the masses suffered, news of corruption had been coming out in the news. The police had been accused of abuse of power.

For me it also feels like Spain, being a part of the European Union, is being run by the decisions made in Brussels, without consulting the Spanish people. In our present condition, common Spanish people are no different from Filipinos in the 20th century, under the rule of the privileged elite and a distant seat of power.

I admit that this might sound as simplification. Spain has problems but we are a relatively more well-off country than the Philippines. Filipinos are still struggling with poverty and excessive abuse from authorities. And yet, like Rizal a lot of people are pushing for change.

When I was finally able to visit the Philippines, I was able to contemplate on the paradoxes of a country with shiny skyscrapers rising above the slums. I visited Boracay, Taal Volcano, Pagsanjan River, Bohol and even crowded Manila. From all these places, I saw how Filipinos remain optimistic despite their situation while Spaniards would often go about complaining about small things. I am jealous of that ability and I feel that Spaniards can learn a lot from their former colony.

A hero of peace

Rizal advocated for non-violent ways of changing the system, working with instead of fighting the enemy, discussion instead of a revolution. While many disagreed with him, his revolutionary spirit could not be questioned, and he paid the ultimate price for his sacrifices. I like to imagine that Rizal would have shared the same advocacy with many Spanish civil groups, who are also trying to change society and improve the lives of the common Spaniard by demanding more democracy and equal opportunities.

When I look at the image of Rizal on the peso coin, I see the face of Filipinos. When I read his words, I find the prose of a Spanish writer. Jose Rizal is still connecting Filipinos and Spanish a century after his death and a nation that calls Rizal their national hero is one that I want to belong to. 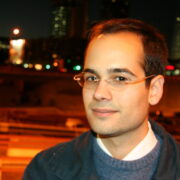 Emilio Tejera (Cádiz, Spain, 1981), M.D., Ph.D., combines working in science with literature. In 2007, he published the novel "Carthage. The empire of gods". You can find more information about his publications and writings in emilio-tejera.blogspot.com.

Two sunrises and a red hat